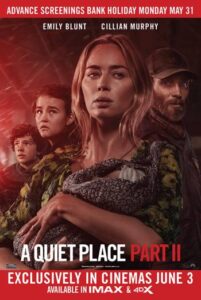 Evelyn Abbott (Emily Blunt) and her children are on the run. Ever since a vicious alien race with super human hearing invaded earth, attacking anything that makes a sound, humans and animals have been decimated and the Abbotts have been driven out of their once safe home.

Silently, so as not to draw the attention of the extra-terrestrial predators, they head out with only a shotgun and sparse supplies.

When they meet a mysterious figure (Cillian Murphy), he informs them that there’s nothing left. While Evelyn pleads with him, saying “there are people out there worth saving”, he tells her that’s not the case – could the Abbotts be about to uncover a new terrifying threat?