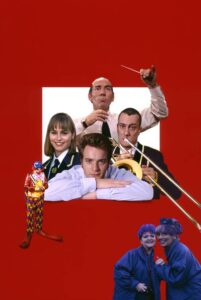 Danny is a retired miner in poor health who directs the Grimley Colliery Band, the pride of the small British town of Grimley. With a national championship coming up, Danny is determined that Grimley will walk away with a trophy. But as news spreads of the local coal mine closing down, the townsfolk don't have music on their minds. In a city already suffering an economic downturn, this is just short of a death sentence.