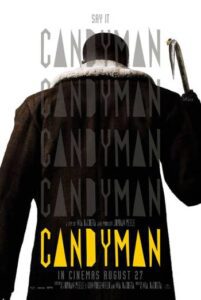 After the events of 1992’s Candyman, it seemed the urban legend had ended once and for all. Not so. This spiritual sequel to the original film in the trilogy sees the Candyman return.

A killer who appears to those who say his name five times while looking in a mirror, his weapon of choice is a hook jammed into his right arm. It sits in place of his severed hand – the one the 1800s son of a slave lost when he was murdered by his lover’s father, smothered in honey, and allowed to be stung to death by a swarm of bees.

While he once terrified the residents of the Cabrini-Green housing projects in Chicago, this area has since become gentrified. What new horror does this apparition, covered in bees, have in store for the new generation of dwellers in the area?

Nia DaCosta directs this new tale that follows on from the ‘90s horror based on Clive Barker’s short story, The Forbidden. Tony Todd steps into the Candyman role once more, where he’s joined by Yahya Abdul-Mateen II and Teyonah Parris in this frightening new instalment. Jordan Peele, director of award-winning horror-thriller Get Out, co-writes and produces this forthcoming reboot.