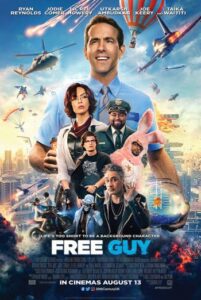 Guy (Ryan Reynolds) is just an ordinary guy. Living each day as it comes, he’s unfazed by the constant violence, disarray, and crime around him as he turns up to work at the bank every day.

One day, though, something a little different happens away from his usual routine. Discovering a strange pair of glasses, Guy is struck with confusion when they appear to offer a different view of reality.

As events begin to unfold, Guy slowly realises that he’s nothing more than a non-playable character within the large, bloody video game world of Free City.

But the now-free-thinking character can be more than that. And when an evil, egotistical programmer (Taika Waititi) in the real world threatens to pull the plug on Guy’s digital world, he might be forced to become the hero the game deserves.