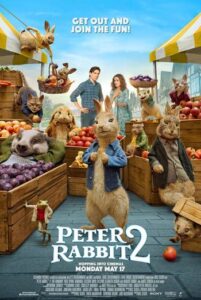 Peter Rabbit and his bunny buddies are back, along with Bea and new husband Thomas McGregor. But Peter is tired of his reputation for mischief and runs away from the countryside where he bumps into an old, adventure-loving friend of his father’s. James Corden, Rose Byrne, Margot Robbie, and Domhnall Gleeson reprise their roles in this funny new part-animated adventure, directed by Will Gluck, based on the stories by Beatrix Potter.
Life is suddenly a bit simpler for Peter Rabbit (James Corden). He and former enemy Thomas McGregor (Domhnall Gleeson) have come to a truce, as Peter accepts Thomas as his adopted mother Bea’s (Rose Byrne) new husband. Meanwhile, out of Mr McGregor’s shop in the village, Bea sells her book about Peter Rabbit’s story, leading to a new level of notoriety.

But sometimes the simple life isn’t all you think it is. Peter’s taste for adventure isn’t going anywhere and his newfound fame has its ups and downs. Plus, Peter is tired of everyone seeing him only as trouble – that includes new family member Thomas McGregor.

Fed up, he sets out on his own. If they think he’s only a mischief maker, maybe he’ll be better off without all the naysayers. Leaving the countryside behind, he runs into streetwise Barnabas, on old friend of Peter’s father. With the temptation of a rebellious lifestyle guided by Barnabas on one side and the comfort of home, friends and family (who put themselves at risk trying to bring him back to the safety of the countryside) on the other, Peter must choose the identity he wants.