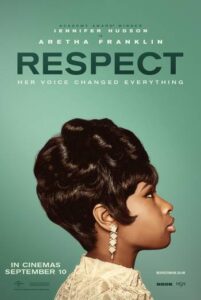 The story of a young girl singing in her fathers church choir who goes on to become one of the most legendary singers and entertainers of modern times. The film charts Franklin's success and hardship, working through personal loss at a young age and releasing her first song while on a gospel tour with her father in her early teens. As time goes on Aretha chooses her own path, moving from gospel to pop on her way to super stardom in the late 1960s to late 1970s experiencing more than her fair share of personal drama along the way.