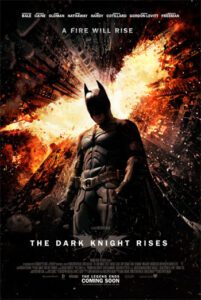 Eight years after the Joker's defeat, Gotham City is enjoying a time of peace and Batman remains in exile. Unbeknown to Gotham's authorities, masked vigilante Bane is planning a new reign of terror that will force Bruce Wayne to once again rise to protect his city. But Bane is no ordinary criminal and is more than up to the task of defeating Batman both physically and mentally. Elusive jewel thief Selina Kyle could be the key to helping Batman, but not everyone is who they seem in this conclusion of Christoper Nolan's Dark Knight trilogy.