The Gruffalo and Zog 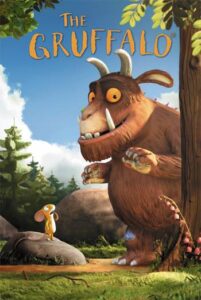 The Gruffalo
A half hour animated film based on the classic picture book written by Julia Donaldson and illustrated by Axel Scheffler, The Gruffalo tells the magical tale of a mouse who takes a walk though the woods in search of a nut. Encountering three predators who all wish to eat him – a fox, an owl and a snake – the plucky mouse has to use his wits to survive. He announces that he is meeting a monster with terrible features, a 'Gruffalo', and the three predators are each panicked into running away.
Mouse is now increasingly confident. There is nothing that can touch him in these woods. Until he rounds a corner and comes face to face with the terrible product of his imagination: the Gruffalo itself. Once again Mouse has to dig deep to escape the danger. Finally he finds a nut, and can eat it in peace.
Zog
A half hour family film based on the much loved picture book written by Julia Donaldson and illustrated by Axel Scheffler.

Zog is the story of a keen young dragon who wants to learn how to fly, roar, and breathe fire in his first years at Dragon School. He's desperate to impress his teacher and win a golden star, but he's accident prone and each year he has to be helped by a kind young girl who patches up his bumps and bruises. Then in Year Four, he has to capture a princess – can the young girl help him with his trickiest challenge yet?